What America Needs Now Is a Drink: Repeal Day

A quick digression from the guest bar tending posts to talk actual history here. Repeal Day is one of my very favorite holidays. Yes, it’s a holiday, dammit. At least for me it is. I’m currently planning a big ol’ shindig at Detroit City Distillery to celebrate National Repeal Day, December 5. In case you’re interested, here’s the link: DCD Repeal Day party. It’s going to be loads of fun: classic cocktails, new twists on Prohibition-era drinks, a photo booth complete with props, and Dr. Carleton Gholz, the director of Detroit Sound Conservancy , presenting early jazz classics for the dancing folk. Oh, and I’m doing a little Show and Tell on Prohibition in Detroit and Repeal Day, too.

So why is Repeal Day such a big deal? Well, for starters, it’s the anniversary of the first and only Amendment to the US Constitution (the 18th Amendment) to have later been repealed (by the 21st Amendment). That’s kind of a doozy. As a law-making nation, by 1920 we were so strongly in favor of a nationwide ban on alcohol that we changed the Constitution. Just 13 years later, we were so disillusioned by the whole darn thing that we whipped up another amendment to our sacred document saying, essentially, “Um. Yeeeeaaahh. We were kind of wrong about that whole thing. Never mind.” Just as loads of factors contributed to the ratification of the 18th Amendment, there were also quite a few reasons that the 21st followed on its heels, 13 years, 10 months, 19 days, 7 hours, and 32 minutes. Or so. Of course, Michigan had its own mini-repeal months earlier; more on that later. Suffice it to say, folks were pretty stoked to celebrate [legal] Repeal.

Prohibition is often called the “Noble Experiment”. And it was, certainly. But the phrase so often attributed to President Herbert Hoover is actually a misquote. Here’s what he actually said, in his acceptance speech in 1928: “Our country has deliberately undertaken a great social and economic experiment, noble in motive and far-reaching in purpose. It must be worked out constructively.” I’ll get into much more detail when I do a post in January about why we got where we got. Today, we’re talking about why we decided it was such a bad idea, and the steps leading up to full national legal Repeal.

The most obvious reason for repeal was that, as Michigan Governor William Comstock succinctly stated, “Prohibition didn’t prohibit.” With law enforcement either corrupted, outgunned, outnumbered, or all of the above, there was no way to stem the massive tide of booze pouring into and around the country. 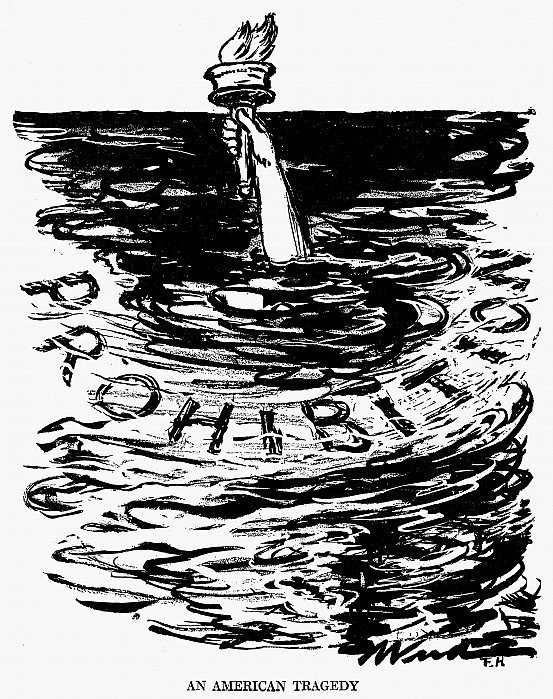 Detroit, of course, had the added advantage (for the “wets” as they were called) of Canada’s close proximity, and the glorious abundance of whiskey available just across the river. A fun little quirk of Canadian customs law allowed Canadian distillers to move liquor through the US, ostensibly en route to Cuba and other wet countries; as a result, by 1925 Hiram Walker was claiming annual shipment of Canadian whiskey bottles to Cuba of 100,000 cases. With 29 breweries and 16 distilleries in Ontario running full steam ahead during Prohibition, there really wasn’t any stopping the juggernaut of booze. For a great video of the Canadian/American relationship during Prohibition, read and watch here. Oh, and it was a huge moneymaker, too: in 1929, illegal booze activity boosted the Detroit economy by bringing in $215 million. And that’s 1929 dollars. It employed 50,000 Detroiters, so yeah, everybody’s grandfather’s cousin’s girlfriend’s brother probably did run booze, or run numbers, or work in a speak.

So it’s not surprising that Michigan led the charge to repeal Prohibition.* Constitutional law not being my forte, I’ll do my best to sum up the byzantine process that led to the national jubilee on December 5, 1933. By the time FDR was voted into office (he ran as an outspoken advocate of Repeal), the nation was utterly disillusioned by the Great Depression, in full force for several years by now. Rumblings of discontent had been in the works for years, and in the spring of 1933, Congress decided to put the Repeal question to a national vote. But they did something a little unorthodox: instead of kicking the question to each state’s legislature, they had the counties in each state vote on a delegate to a statewide convention: counties chose between a candidate who would vote wet and one who would vote dry. Congress also left it up to the states to decide when to hold these conventions, on the thought that dry states would take their sweet time. National Repeal would require ratification of the 21st amendment by at least 36 states.

So, upon hearing the news that Repeal was up for a vote, Michigan swung into action. I mean, they rushed into action. They scrambled together an election for April 3, 1933: the first in the nation by several weeks (most held theirs in November). Who did Michigan send to that convention? 99 wets and one lonely dry (good on you, Barry County. I guess). The convention, held April 10, unsurprisingly voted for Repeal. Of course, drinking still wasn’t technically legal at this point, but then it never really stopped us before that point either, so Michigan and Detroit especially launched into a months-long debauch.

At that same convention, they declared any alcohol lower than 3.2% ABV to be totally legal, really. Now, this obviously isn’t much (consider that your Coors Light packs a whopping 4.2%), but by the end of the month they’d “legalized” beer and wine for adults 18 and over. On May 10, 1933, Julius Stroh himself poured the first beer to a massive “Detroit Victory Day” party: 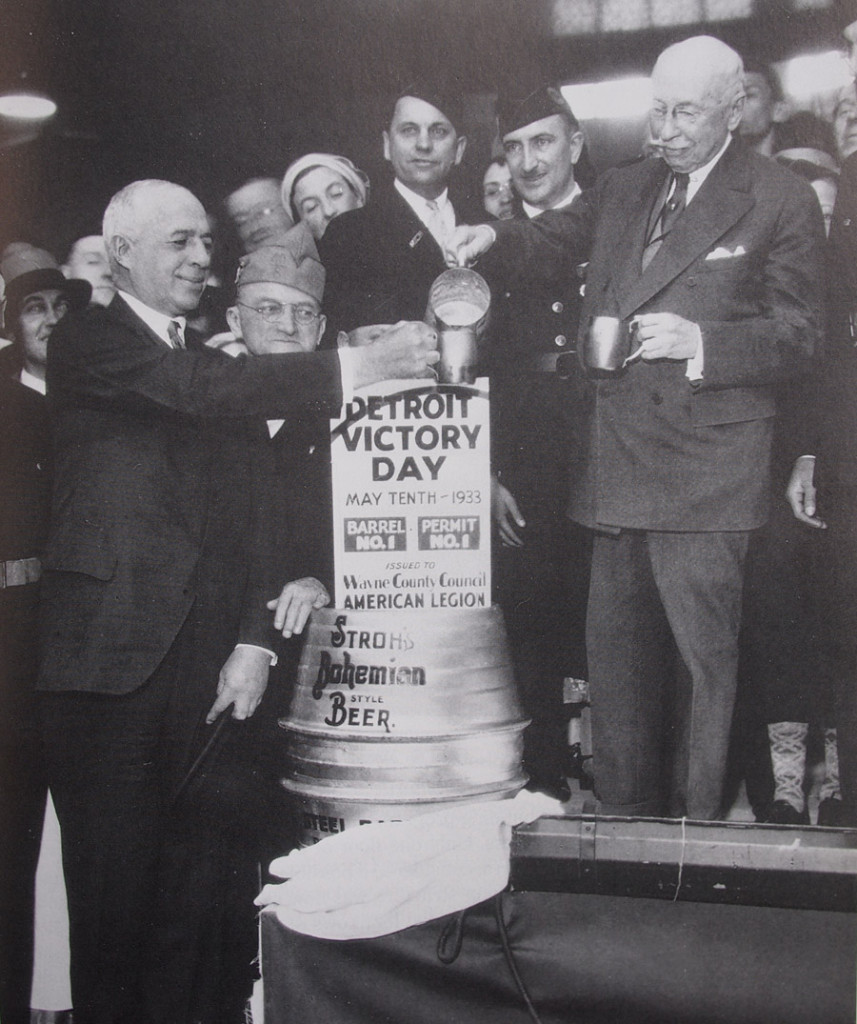 This, incidentally, is why (smartly) Ye Olde Tap Room celebrates Repeal Day in May. The next round of elections went overwhelmingly to the wets, the dry states generally refusing to even schedule their conventions, although North and South Carolina both voted dry on November 7, 1933. No worries, though, as by December 5th at 5:32 pm,  we’d hit the magical number: 36 states. With Utah, of all places. This prompted FDR to quip, “What America needs now is a drink”. Notable holdouts were the southern and western states. In fact, Mississippi was the final state to ratify the 21st Amendment in 1966 and HOLY COW YOU COULDN’T DRINK LEGALLY IN MISSISSIPPI UNTIL 1966!

Thus concludes our history lesson on Constitutional amendments, the Amalgamated Order of Pretzels, and Michigan’s trailblazing drinking history. Don’t forget to join me and the Detroit Drunken Historical Society at Detroit City Distillery on the 5th. The party starts at 7, but I’ll be quaffing an Old Fashioned right at the 5:32 mark, because I’m a stickler. See you at the bar.

*Of course, we did also have a statewide repeal for years and years before many other states, and we also voted Temperance Textbooks as mandatory reading in schools, so there’s that. More on our repeated and ineffectual attempts at Pre-Prohibition prohibitions in January.