There’s nothing like writing about an Irish bar by opening in Latin. Resurget Cineribus, for those of you not lucky or cursed enough to have gone to Catholic school back in the day, translates to “it will arise from the ashes”. This is, in addition to being the second half of Detroit’s official city motto since 1805, an apt phrase for a bar that’s suffered through declining population, theft, economic downturns, and a near-catastrophic fire, not to mention an absurd Long John Silver commercial. Nancy Whiskey has been around for a long time–as a bar since 1902, as a matter of fact–and these trivialities won’t hold it down for long. It’s a good Irish bar in a town that is sadly lacking in them.

Corktown, the area just west of downtown Detroit, originated as a stagecoach stop and then a rural suburb: yes, at one time, Corktown was the boonies of Detroit. I’ll save the lengthy expositions on Detroit’s Irish history for book #2, but I just have to throw this in to give you a sense of how far out it really was. Here’s the context: on March 6, 1863, Irish-American citizens of Detroit angered over the Civil War draft and economic depression rioted in the black sections of town, now Greektown, where the bleedin’ Old Shillelagh is now, because we love ourselves some dark comic juxtaposition here in Detroit. The rioters killed several and did thousands of dollars of property damage.  Here’s the statement of one of the riot’s victims, Thomas Holton:

“[A]ll the streets seemed to be filled with the mob. Without a moment’s time, to even put on cloak, bonnet, or shawl, we started and wandered out to find a friend’s house in the suburbs of the city, but losing our way, we found, on inquiry, way in the night, that we had been three miles and a half from the city. Being now at Cork Town, I feared to let them know who we were, for they might be a part of the number who had driven us from our homes. We wandered all that night in the woods, with nothing to eat, nor covering from the cold, till morning light. With frosted feet and all our property destroyed, did the morning sun rise upon us, as destitute as when we came into the world, with the exception of what we had on, and without a friend to offer us protection, so far as we could learn. Oh, Detroit! Detroit, how hast thou fallen! No power in noonday to defend the helpless women and children from outlaws, till they have fully glutted their hellish appetites on the weak and defenseless. Humanity, where is thy blush!”

Right. So, to get away from our long and troubled racial history here in Detroit, back to late-19th-century Corktown. By then the area was still predominantly Irish-American, increasingly urbanized, and reasonably middle-class. Hence, time for Digby’s general store. The name is still tiled on the front stoop. Within 4 years, the building was a saloon instead, though. That’s not uncommon, especially for turn of the 20th century bars: you start out as a general store, and also happen to sell booze, and pretty soon you need more and more room for said booze, so you ditch the sundries and focus on the money maker. We do love our drinking here, and always have.

Nancy Whiskey has been a bar since 1902, and claims to have the oldest uninterrupted liquor license in the city. Now, this kind of thing is often a point of contention, as there are quite a few ways to determine “oldest bar in Detroit” status. I haven’t had a chance yet to investigate these details, and really, it’s a semantic question. They’re old. People have been drinking in that building for well over a hundred years, and that’s pretty impressive.

When I arrived for my shift at 6 pm, I was excited but a bit nervous. I know my way around a bar (on both sides of the rail) pretty well, but there’s always that disorienting moment when you step behind the rail and survey the scene. Where’s the speed rail? What beer do I have, and where is it? How do I clean dishes? Ring in drinks? And food–there’s food? I don’t have time to learn the menu! And a new POS system–what if I screw it up completely and the drawer is off by hundreds of dollars and the welcoming, generous Patrick thinks I’m an idiot or a thief? Fortunately, a bar setup is pretty standard across the board for generations now, and Patrick and Sheryl gave me a great intro. Plus, there was a therapy dog on hand to ease my nerves:

Also fortunate is that I’m Irish, and look the part. Within minutes of being there, I was being grilled by the regulars: Where’s your family from? What’s your last name? Lyons, okay, good. Then all they had to do was yell down the bar, “Lyons! Another beer already, come on!” It’s that kind of place. That old-school kind where, if you’re the only one who ever drinks a particular liquor, they keep it on hand for you and the last shot out of the bottle is free. The kind that has one beer and only one beer on tap: Guinness. According to Gerald, the owner, “that’s the only beer that deserves to be on tap.”

The kind where the regulars are cool with newbies, so long as they partake in the obligatory Tullamore Dew. That’s a tradition that Nancy herself started, and a good example of the spirit of Nancy Whiskey. When an unfamiliar face comes in, you find out if it’s their first time. If it is, then there’s a shot of Tully on the house, and it’s customary for the bartender to do a little nip; after all, you can’t let your new friend drink alone! By 8, I had lots of new friends and had dug into the emergency candy bar stash in my purse in order to maintain sobriety. 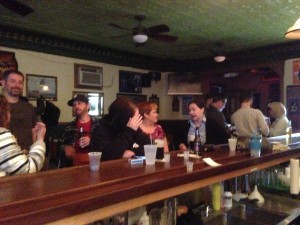 And by 9:30, I was legitimately busy. Between the Tigers game, the Nancy regulars, some of my friends, and then the usual suspects after band practice, I was on my toes and having an absolute blast. Each bar has its own temperament and its own peak crowd levels. Some bars shine best with just a few friends late at night, solving all the world’s problems and arguing politics. Some are late-shift bars, when the auto workers and cops and firefighters are roaring it up at 9 am. I think it has a lot to do with the character of the building: the generations of accumulated hum from various friends and strangers leaving an indelible stamp on the floors, the ceiling, the bar top. Last night, for me at least, Nancy was shining with the perfect combination of newcomers, regulars, couples, and returning neighborhood folk. Nancy Whiskey is the local for all sorts of people, and geography doesn’t have a whole lot to do with it. After last night, I can see why.

I was a bit too busy actually tending bar last night to tour the facilities and dig stories of the old days out of owners, staff and regulars. But I’ll be back soon–possibly this week–and I promise once I get the real scoop on the speakeasy history of Nancy I’ll fill you in. Until then, a couple of tidbits I was able to glean in between pouring Tully:

1) Totally haunted. By no fewer than 3 ghosts, according to Sheryl, who also assured me that they’re all friendly spirits. I wouldn’t expect anything less from an Irish haunting, and I imagine there are worse ways to spend the afterlife than in a pub like this one.

2) The phone booth in the corner was the “office” of the infamous Jimmy Hoffa. Apparently he conducted all sorts of business matters from that booth, and would often station his security outside so no one would dare enter the bar and disturb him.

3) Finally, I learned over the course of the evening that Irish cheer is still alive and well in Corktown, aided by generous pours of Tullamore Dew, Jameson, Powers, Knappogue, Tealing, McFadden, Bushmills, Redbreast…and a few I’ve lost in the haze of memory.

My thanks to Patrick, who let me fumble my way around his bar last night, and to Monique, who talked him into it in the first place, and to all the folks who helped me have such a good time last night. See you at the bar.