It’s Not All Primrose Paths: Saving the Norris House

Bear with me folks. This is a bit of a digression from the usual happy-go-lucky bar stories, but it starts with a bar and it’s dear to my heart.

Last week, the Two Way Inn hosted a day-long cleanup of the area surrounding the bar. Now, you know that the Two Way is the oldest bar in Detroit, since 1876,* but you may not know a lot about the man who built it, that fine fellow Colonel Philetus Norris. Say it with me: Colonel Philetus Norris. It just rolls off the tongue, doesn’t it? Plus, just look at this fantastic man:

That right there is a man. A mountain man–or at least a prairie man. A man’s man. Philetus moved to Michigan from New York when he was just a wee lad of 9, around 1830. He spent his teen years trapping and hunting all over the state, and later served with distinction in the Civil War. Eventually he moved back up to Michigan and cleared out some frontier to found himself a town. Originally called Prairie Town, pretty soon the locals started calling it Norristown, or, since we love clever little neighborhood names around here, Nortown. Norris built himself a one-stop shop for the land for miles around: stagecoach stop, general store, dance hall, post office, jail (and some say brothel, but likely that came later after the teetotalling Norris left town). The first building went up in 1873.* You may know it as this: 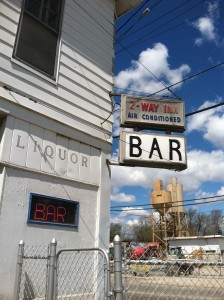 I’ll devote plenty of space in a future post to the glory that is the Two Way Inn, but for right now we’re focusing on Colonel Norris. That portrait up above there? It’s his official portrait as second superintendent of Yellowstone National Park, where he shipped out in 1877 right from our own front yard. He was responsible for a great deal of the exploration and mapping of Yellowstone, and it’s for him that the Norris Geyser Basin there is named. So, yeah, dude was pretty remarkable. In the few short years he was here in Nortown, Norris managed to build another, larger private home just down the road from his original haunt for his growing family. It was spacious and sunny and just covered in gingerbread and doodads and gewgaws. The house went through several owners in the 100+ years after the Norrises left. Nortown evolved from a sleepy hamlet to a busy small factory center to its current, significantly less populous, status.

BUT–and here’s where I finally get to the point of this post!–that second house, despite abandonment and vandalism and several fires, still stands. It’s on the National Register of Historic Places, and rightly so. It has a fanatically dedicated group of volunteers committed to saving it. They’re dedicated, but there aren’t too many of them, and they’re mostly the sort that will just pick up trash or mow the lawn when it needs it, rather than standing on the steps of city hall with a bullhorn. Despite their efforts, though, city council has put the Norris house on a list of properties that qualify as “abandoned and derelict”, and set up proceedings to demolish the house.

Demolish. It’s such an ugly, irrevocable word. It means we lose a part of history–a material, physical, salvageable structure–that we can never get back. And it means we do it intentionally, spending money in the process. No, the Norris house isn’t currently terribly pretty. Before we go all “City Council is a [insert insult here]”, please understand that there are policies and procedures for these things. The Norris house made it onto a list, and we have to follow those policies to get it OFF that list. That’s going to take a lot more than bitching and gnashing of teeth. A very determined woman named Pat Bosch is the director of the Nortown CDC, and woo boy, I would not want to get in her way. She’s stubborn in all the right ways, and committed to saving the house. But she’s not an architect or a roofer, nor can she plant herself in front of the house 24/7 to protect it from further damage. She’s done her best to stave off the ravages of time and idiot hooligans and to educate anyone who comes her way about the continued efforts to preserve the home.

Nortown CDC, the Norris house, and the residents of Nortown could use our help. If we lose this building, we can’t bring it back come better days. City Council has the demolition order as item 19 on tomorrow (May 5th, 2015)’s agenda. But the thing is, if enough folks speak up and insist that the building is cared for, is worth saving, then we can get a stay of execution, as it were, for the Norris house. This will buy us enough time to come up with a plan of attack for shoring up the defenses and restoring it to its deserved grandeur.

So, let’s do some work to preserve this historical treasure. If you can’t stroll down to city hall and attend the council meeting, you can always write or call the District Three council member, Scott Benson:

There’s your call to action, folks. I know it’s not as exciting or glamorous as a call to join me at the bar, but sometimes the life isn’t always beer and fun stories. Oh, and you want some final irony? Tomorrow, Mary Aganowski, the owner of the Two Way Inn, will receive the Spirit of Detroit award in the very same building as the council meeting to determine the Norris House fate.

Well, since you asked, Michigan technically had a statewide Prohibition on the books from 1853-1876. Ergo, no liquor licenses and so technically no bars existed at the time. There. Now we’re back to Prohibition Detroit.