You may have noticed by now that there isn’t exactly a chronological order to these posts about the bar challenge: either by date of my shift or in order of bar age. But this, in case you’re wondering, is the bar that started it all for me. Two Way was the first historic Detroit bar that I worked at, and was in fact one of the very first historic Detroit bars I visited way back when I first moved back to the city and was running tours. It’s also, coincidentally, probably the oldest bar in Detroit.*

For these and many other reasons I’ll get to, the Two Way holds a very special and dear place in my heart. It’s a dead ringer for a Deadwood, Wild West era saloon, probably because it was a saloon on what was then the frontier of Detroit. You see, well before Henry Ford and the auto industry, Detroit existed. And back when Detroit was a mere 150+ year old town, the intersection of Mount Elliott and Nevada was an area known as Prairie Town, because, well, it was a prairie. That all changed when Colonel Norris moved to town (cue the Gunslinger audio, or maybe the Bonanza theme). I’ve already covered Colonel Norris’s amazing pioneering history here: http://prohibitiondetroit.com/web/its-not-all-primrose-paths-saving-the-norris-house/. And yes, we are still working feverishly to restore the Norris House.

Back to the Two Way. Built in 1873 and opened as a saloon in 1876, the Two Way also served as general store, stagecoach and railroad station, sometime hotel, jail, dance hall, possibly brothel, and, during Prohibition, was owned by a dentist. Why is this significant? Well, you see, during National Prohibition the Volstead Act allowed a bit of wiggle room for the legal purchase of alcohol.* If you really needed to get your drink on, you could have a doctor prescribe you booze: up to a pint of whiskey every 10 days. Enough to wet your whistle, as they say. So, despite not having a whole lot of firm records of illegal activity–and what kind of speakeasy would it be if we had records, anyway?–we can pretty safely bet that the hooch continued to flow at the Two Way throughout its lengthy and storied history.

My very first shift at the Two Way was back in December, on a cold and dreary Tuesday. I’ve worked a shift or seven by this time, and so this post is really an amalgamation of the nights I’ve worked there. I’ve also frequented the other side of the rail a time or seven. And yes, the neighborhood isn’t what it used to be. And yes, your car is totally safe there. I’ve left mine there overnight on two separate occasions, thanks to the generosity and great conversation and free pours of the bar staff.

While it’s near impossible for me to give a “first impression” by this time, I can give you some general descriptors of the place. First: homey. Like, impossibly so. The Two Way family (owned by the Malak family since 1973) is so warm and welcoming, you’ll instantly feel like you’ve met a long-lost relative. Mary’s father bought the bar, and she moved into the building when she was a teenager. She had her 21st birthday party there. So did her daughters. And their children will too. The Two Way Inn is the sort of place that most folks have to make a conscious effort to go to, but I have yet to meet anyone who ever thought it was the wrong call. Once you’re in the doors, the dark wood walls and floor cocoon you with a sense of warm welcome. Grandpa Malak’s hunting trophies line the walls, usually decorated for the next big holiday, but sometimes simply sporting a jaunty hat or cigarette:

At the Two Way, traditions matter. A good Polish welcome and the free flow of Jezy are part of that. Another tradition is the quarter toss, begun decades ago: you stand at the far right end of the bar and rest your leg on the worn brass foot rail. Using your right hand, you take a quarter and make a wish. Then you toss that quarter high up in the air to the very top of the back bar (a gorgeous old Stroh’s-crafted back bar) and wait for it to disappear into the hollow space behind the facing. If you make the toss, it drops down with a barely audible “plink” and your wish is heard by the Bar Gods. If not, the bartender gets a shiny quarter.

Another tradition is the bell. Woe betide you if you ring the big brass bell hanging so enticingly over the center of the bar without reading the sign. I’d love to say you and your progeny are cursed by the Ghosts of the Two Way for generations**, but really you’ll just get a nasty stare from the bartender. The sign above the bell (and I tell you this to avoid the dirty looks) reads “If you ring the bell in jest/you buy a drink for all the rest”. Whether you ring it in jest or not, once that bell rings, it means you’re “standing a round” for everyone there.

Let me tell you, there’s no feeling like the one you get when you ring that bell. Of course, I’ve only done it a couple of times, but oh the power. I was there one night when a fellow was in celebrating his first night out in months with his wife, who’d just had a baby. There was a bus full of people–about 50 in all. He rang that bell twice in 45 minutes and. It. Was. Awesome.

Oh, and the name Two Way Inn? There’s another old story that’s part of the tradition at the bar. Back in the days before insurance regulations boarded up so many of the beautiful old windows and entrances to old saloons, there were two ways in and two ways out of the bar. That was, they say, just in case the police or an ornery wife came looking for you.

Finally, I’d like to give great big thanks to Dan Pantalleresco, son-in-law of Mary, husband of Danielle, father to two adorable kids, carpenter, bartender and all-around good guy. He set up this site for me, so without him none of this silly project would be happening. See you at the bar, Dan. 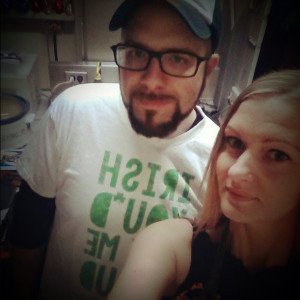 *Getting specific dates on bar operations is nearly impossible, but Two Way is in the very front running for the title. See my article in Model D about “Just what exactly is the oldest bar in Detroit, anyway?”

**I wasn’t kidding about the ghosts. Totally haunted. Trust me. No, I won’t tell you the stories here. You’ll just have to go in and experience them for yourself.